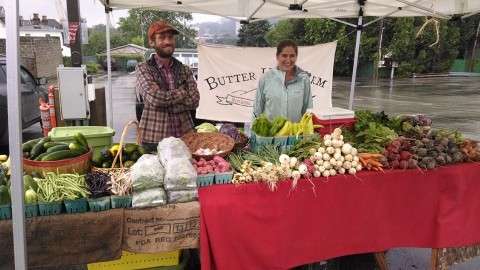 The Bloomfield Saturday Market has partnered with Just Harvest’s Fresh Access program to give SNAP users a $2 match for every $5 dollars spent in food stamps.

SNAP offers nutrition assistance to millions of eligible, low-income individuals and families and provides economic benefits to communities. The Fresh Access program is designed to enable SNAP shoppers to use their food benefits at participating farmer’s markets, and the matching funds may be used to purchase fruit and vegetables.

Program participants should stop by the Market’s red information tent to use their benefits at the Market.

96% of food stamp shoppers rated the Fresh Access program as “Important” or “Very Important” for purchasing fruits and vegetables.

95% of food stamp shoppers rated the Fresh Access program as “Important” or “Very Important” in their decision to shop at farmers markets.

80% of food stamp shoppers said their produce consumption has increased as a result of the Fresh Access program.

99% of food stamp shoppers found the program easy to use. 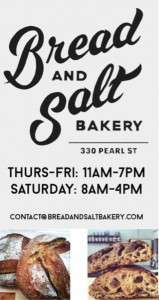 – Quote from the Rubáiyát of Omar Khayyám

Rick Easton first discovered the sublime pleasure of artisanal bread while traveling in Morocco and later learned that almost every European culture also understands what Omar Khayyám was on about when he wrote his famous poem.

If you’ve never quite grasped the meaning of The Rubáiyát, stop by Bread and Salt, Easton’s fine new bakery and discover for yourself the lyrical qualities to be had in a hand-crafted loaf of bread.

Easton, who opened his bakery at 330 Pearl Street in January, uses the finest ingredients to produce his breads. The result is a loaf that is both crusty and tender with just a hint of smoke.

A jug of wine and thou, indeed.

It’s a Friday night and the line at Tessaro’s is out the door. Inside expectant diners stand three deep at the bar waiting for a table while waitresses in black aprons skillfully navigate the crowd, serving those already seated at one of the booths along the wall.

Despite the usual weekend crush, Tessaro’s has always been well worth the wait, but an expansion into the building next door should help alleviate the overflow.

The new space, which is the culmination of five years of meticulous planning, will include a brick-walled party room and a courtyard charmingly tucked inside an enclave of row houses.

When Kelly Harrington bought Tessaro’s in 1985, he kept the bar’s name, but changed the menu. Harrington was on a quest to perfect the hamburger, and he succeeded admirably, developing a recipe that calls for a proprietary blend of Choice-grade chuck, shoulder, brisket, short ribs, spencer steak, New York Strip and filet, all of which are freshly ground together each morning by in-house butcher, Dominic Piccola.

This meat is then cooked over an open flame burning cured hardwoods, including oak, maple, and hickory, that produce temperatures ranging anywhere between 400 and 600 degrees. On any given weekend night, Courtney MacFarland, who has headed the cooking staff for over 28 years, grills up to 550 burgers to order.

For those who enjoy dinner theater, Courtney and crew also serve up a nightly performance that can be seen through a large window in the main dining room. Customers can watch as wood is fed into hearth, the meat is hand formed into half-pound patties and then seared on the grill, and the cooks control the resulting flames the only way they can, by beating them back with water.

Given that the restaurant has been serving burgers that food critics put on the short list of best in the U.S., it’s not surprising that on weekends it’s standing room only.

This is the second addition to the restaurant, which was originally housed at 4601 Liberty Avenue, a narrow brick storefront on the corner of Liberty and Taylor. To accommodate a growing clientele, Harrington bought the building next door, knocked out walls, and incorporated that space into the restaurant in 1995. He later purchased a third, adjacent building, as well as two buildings in the back, but tragically passed away in 2009 before realizing his plans to expand yet again.

Today, 30 years after Kelly first opened Tesssaro’s, his sisters, Moira and Mike, are carrying out their brother’s vision. With the blessing of their mother, Tee, who now owns the restaurant, the sisters began working on the addition in 2010.

This required jumping through a number of bureaucratic hoops, including applying for an extension of the liquor license; requesting an exception to use the space behind the building for commercial, rather than residential, purposes; and an exemption from the zoning board to incorporate the new building and the four backyards into the business.

Additionally, before they could apply for a building permit, they had to procure a sidewalk café permit, an encroachment permit, a permit to consolidate the lots, and a plumbing permit. They also spoke with several neighborhood organizations, including the Bloomfield Development Corporation, to determine if there were any objections to their plans.

The Harringtons also applied for, and were awarded, two Streetface Grants from the Urban Redevelopment Authority of Pittsburgh. This program pays up to 30% of the cost of improving and extending a commercial building’s façade.

The first grant will be used to allay the cost of exterior improvements along Liberty Avenue, including new windows, lighting, and signage. A second will be used to install a new window, door, and awning along the side of the building that faces Taylor Street.

After the contractor broke ground on the project last summer, the back yards were excavated and a French drain was installed to allow for drainage before pavers were laid for the patio. In addition, an exterior wall was demolished, and then rebuilt with large plate glass windows overlooking the courtyard.

It’s been a long time coming, but by summer diners will be able to enjoy their meals at Tessaro’s al fresco.

In addition to burgers, the restaurant offers a full menu that includes steak, ribs, chicken, and fish all of which are fresh and grilled to order. To find out more about the restaurant and read the menu, go to www.tessaros.com.

Though he’s best known for Pandemic, his long-running series of raucous dance parties, Bloomfield resident Pete Spynda, is now taking the festivities from the club scene to a number of outdoor, family-friendly venues.

This DJ, concert promoter, and party-thrower, will be introducing an eclectic mix of world music to Pittsburghers of all ages with a summer of foot-stomping events.

Spynda kicks off the merry-making on May 2nd with Pittonkatonk, a loud, riotous, and just-plain-fun brass band festival and potluck.

Like last years’ event, which drew a hip crowd of over 750, this year’s festival features an assortment of high-energy, mobile marching bands playing a global mix. And because there’s no stage, the bands mingle with revelers who dance until their feet hurt.

To the uninitiated, dancing to the music of brass marching bands may sound incongruous, so Spynda puts the scene into its musical context, pointing out that, “There’s a whole legacy of carnival bands in Brazil, marching jazz bands in New Orleans, and Balkan brass ensembles that perform at wedding, parades, and funerals.”

But unlike these more established genres, Pittonkatonk features music that sometimes defies category.

While What Cheer? Brigade, an 18-piece punk brass band from Providence, RI, plays an aggressive mix of Bollywood, hip-hop, punk, and Latin; the 27-piece Detroit Party Marching Band, pumps out what it describes as party-ready “Guerrilla brass.”

After Pittonkatonk, the party continues with Weather Permitting, a summer-long Sunday evening concert series. A collaboration between Spynda and Shadyside Nursery owners, Bill Brittain and Mike Georges, the series is now in it’s third year. Every week the nursery turns into a vibrant outdoor event space featuring bands, beer from local breweries, food trucks, and a farmer’s market. Last year the series averaged 150-200 partygoers each week and it’s growing in popularity, in large part because it too is family-friendly.

As a father, Spynda understands the need for events where adults can bring their family. “An outdoor space allows everyone to enjoy the music away from the usual nighttime scene in bars and clubs.” While Spynda books the bands and sets the scene for his summer series, his 6-year-old daughter, Sophie, an aspiring event planner, organizes the childrens’ activities and personally tests all squirt guns, bubble wands, and other toys before they are distributed to the crowd.

Spynda also manages the Bayardstown Social Club, another cool summer alternative to the bar scene. The Club, which turns an empty lot in the Strip District into a backyard barbecue, provides members and guests with grills, a horseshoe pit, picnic tables, food trucks, and live music.

In addition to his roster of summer events, Spynda takes Pandemic for a spin the first Friday of every month at Brillobox in Lawrenceville where party-goers dance to a hybrid of traditional folk and contemporary dance music from around the world, including gypsy brass, cumbia, chalga, bollywood, afrobeats, Arabic and African hip hop, and Brazilian bass.

Pandemic has also turned up the volume at the Three Rivers Arts Festival, the Carnegie International, the Andy Warhol Museum, and the Pittsburgh Center for the Arts, and is available to light up private parties throughout the region.

A year ago, the future of Woolslair Elementary was uncertain. Pittsburgh Public Schools had recommended closing it, and although the school board rescinded the closure, parents and staff worried that this was only a temporary situation.

Today, the outlook for the school is much brighter. Beginning in the 2015-2016 school year, Woolslair will be a partial magnet school with a new curriculum focused on STEAM (Science, Technology, Engineering, Arts, and Math), which emphasizes hands-on learning and uses different disciplines to complete projects related to real-world issues.

This new vision for the school came from a grassroots effort made up of Woolslair parents, staff, and community members, who planned for months and then successfully lobbied the school board to approve their plan.

“We really all came together to decide what we wanted the future of this school to look like in the long-term,” says Valerie Allman, a Woolslair parent who was active in the planning and attended professional development alongside teachers during the summer to get educated on STEAM curricula.

Parents with kids approaching kindergarten age seem just as excited about the new vision. “STEAM is the future,” says Amber Thompson, a Manchester resident whose daughter is starting kindergarten at Woolslair next year. “Our kids need to be well-rounded if they’re going to be prepared for the 21st century.”

Ms. Thompson says she was also drawn to the culture of the school. “It seems like Woolslair is a real community, and the supports are there for the children.”

Although changes to the curriculum won’t begin until next school year, Woolslair teachers have already implemented an afterschool club teaching Scratch, a tool that allows students to learn the basics of computer programming by building their own video games and animations, in partnership with the Sprout Fund’s Digital Corps. Students are also building and programming robots, and the club recently held a special three-hour session to host the National STEM Video Game Challenge Tour, where Woolslair students had the chance to compete against other kids across the nation.

Next year, all students in grades K-2 will receive the new STEAM programming, and an additional grade level will be added each year. Families residing in Bloomfield, Lower Lawrenceville, Friendship, Polish Hill, and the Strip District still have automatic entrance to the school. City residents outside these neighborhoods can also apply through the magnet process. Spots are still available. For more information or to enroll, please contact Woolslair at (412) 529-8800.